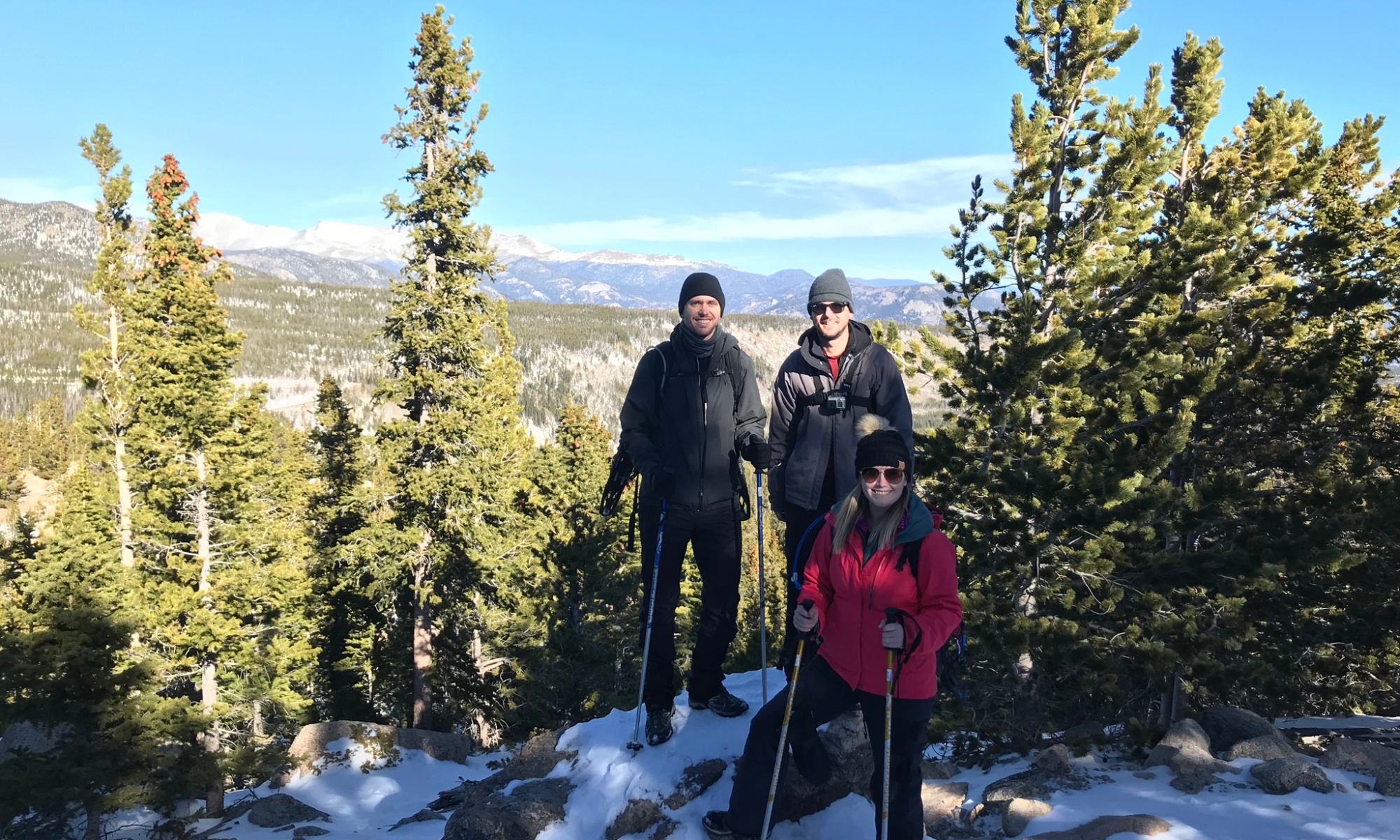 This post has been over a year in the making, but alas I just hadn’t got around to it. This hike was on December 14, 2018.

For months, my brother, Matt, and I discussed the possibility of him flying to Denver from Houston for a short vacation before the holidays. As soon as he booked his plane ticket for a long weekend in Colorado, though, we pretty much had decided that we needed to go snowshoeing.

In 2017, Carly and I attempted, unsuccessfully, to go snowshoeing, with the main reason we failed being lack of snow. Even though we had some good snow in the mountains leading up to his visit, I knew we were probably going to have to go pretty deep in the mountains and to a fairly high elevation to have enough snow to need snowshoes. Hiking in the winter in the mountains sounded fun enough, but we really wanted to get deep enough snow to justify needing the snowshoes.

After a little research and discussion, we all decided that Rocky Mountain National Park was going to be our best bet, because it was at a higher elevation and through our research found that people had used snowshoes there in the last week. Through a little research on AllTrails, we thought that the Glacier Gorge Trail to Loch Lake was going to be a challenge, but a fun one that let us experience all of RMNP.

None of us really had true winter boots per se, but we did have waterproof hiking boots that we thought would work, and we rented the snowshoes and poles from Christy’s on our way up. The drive through Estes Park to the entrance of the park is incredible, but the beauty once inside the party is indescribable. You truly feel a sense of awe being surrounded by the snow capped peaks and endless forest. Once we decided how to strap our poles to our backpacks, we were off to explore the wilderness in front of us!

Starting out, there was snow on the ground, but it was more or less just a thin layer of really packed snow that didn’t exactly warrant snowshoes. The boots we had were perfect for this, and at times, we were a bit overdressed, battling getting hot and sweating. A lesson I should’ve learned from snowboarding..

It still wasn’t deep enough to need the snowshoes, but it was warm enough and sunny enough to make the packed snow fairly slippery. The poles definitely came in handy when traversing those stretches.

Eventually though, we did get to a point where the snow was too deep to walk in just our boots, so we had to strap on the snowshoes. Admittedly, once I had them on, I may have been intentionally walking in the deepest snow I could find just to try them out.

We were quite a way into our journey when we ran into a group of guys that were ice climbing. I had never seen people doing this in real life, and only envisioned it in the most extreme of places – like climbing Mount Everest – and had never considered that people would go out and do this for fun. Seeing them with their ice picks and spikes on their boots made me want to try it, though. One day…

Shortly after leaving the ice climbers to their craft, we arrived at our destination of Loch Lake. There were times along the way that I wasn’t sure we were going to make it, but it was a triumphant feeling making it to the top and taking in the scene. It was a bit eerie being in such a cold, remote place, all by ourselves, with nothing to hear but the wind through the pines. It was peaceful, but knowing that you were standing in the middle of a frozen lake with nobody to save you if something went wrong was unsettling at the same time.

For the record, our low-top, summer hiking boots were not the proper footwear for hours of hiking in the snow. They worked for a time, but by the end, our feet were soaked and cold. So a word of caution to make sure you set out with actual winter boots if you plan on being out there for any substantial amount of time!

I’ll let the video do the talking for the rest of the journey!

We stopped by Bear Lake near the trail head for a few quick picks out on the ice before we made the journey back home to Denver.

We haven’t made it out snowshoeing yet this year, but hiking in the snow is something that I enjoyed a lot more than I thought I would. Until next time!!

One Reply to “Snowshoeing in Rocky Mountain National Park”