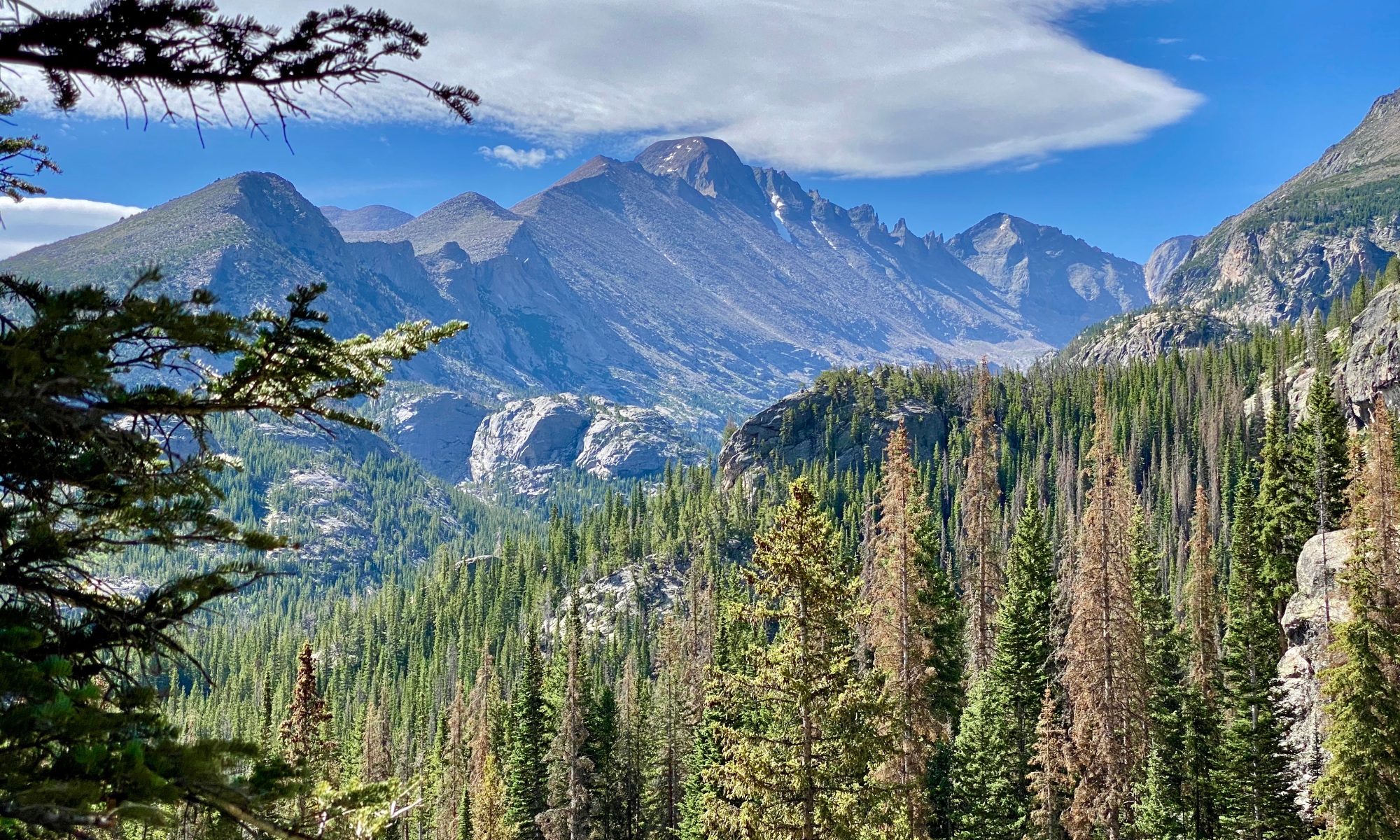 During my parents visit over the Fourth of July weekend, the plan was for us to visit the main part of Rocky Mountain National Park that my mom, despite her many trips to Colorado already, had not visited. Unfortunately, we realized too late that you needed a reservation for a timed entry, due to COVID, and we hadn’t planned ahead for that. Our only option at that point was to wait until Friday morning, when we could try to secure a spot at the park for Sunday; however, we knew the day after the 4th of July was going to be insane trying to get back to Denver after our day at the park. So while we did briefly wander into RMNP last weekend, we didn’t reach the part of the park that my mom was really wanting to explore.

After all the research and anticipation last week, though, Carly and I decided that we were going to go try out the trail that we had intended to do the week before. We already picked out the trail to Emerald Lake and we had enough time to get our reservation at the park this week. The reservations are in 2 hour increments, starting at 6am, and since we had a 2 hour drive to get there, we decided 8am was the earliest we were going to make it. We packed up our gear the night before, so that we could get an early start and make it right at the beginning of our two hour window.

We arrived to the entrance of the park around 7:50am, just before our timed entry, and we were greeted with a line of 20-30 cars on the side of the road that were clearly also waiting for 8am. We pulled off to the side and got in “line”, though I put it in quotes because it was far from orderly. There were only 65 reservations available at 6am and it felt like we were pretty close to the front of the line for the 8am reservation; however, upon entering the park, we were directed to the park and ride because the Bear Lake parking lot was already full! I certainly had hoped to avoid any situations where I’m packed in an enclosed bus with the pandemic going on, but it was looking like today that wasn’t going to be possible. We parked at the park and ride, waited about 10 minutes for the bus to arrive, and then made our way to the Bear Lake trailhead. As we got there, the parking lot was indeed full, and my only assumption is that most of the 65 people at 6am had wanted to come here.

We quickly realized that, despite this being the third most popular national park in the country, it was still really easy to get off the trail that you intended to be on. It took us a couple different restarts before we were finally on our way up the trail. It did allow us to take a few pictures around Bear Lake, so it wasn’t a total loss that we couldn’t figure out where to go.

We actually didn’t follow the sign with the arrow pointing to Emerald Lake that had numerous people heading up, but instead took a side shoot off the Bear Lake Trail to Nymph Lake. It proved to be much more difficult terrain, but I didn’t mind, and it helped us to avoid the masses moving up the other way.

It was a quick hike to Nymph Lake, even taking the more rocky path that we took, and we quickly realized the type of day that we were in for. Looking across Nymph Lake at the yellow water lilies perched on top of the water, with their stems visibly reaching down through the clear water to the bottom, the family of ducks gliding gracefully across the lake, and the imposing peaks standing behind it all, it was a serene location that you don’t often come across. This is why this place was designated as a national park and this is why this place is so popular. It was breathtaking.

I honestly think we could’ve spent all day at Nymph Lake, but soon the crowds came to push us along further down the path, and we had to peel ourselves away from this precious place. This was another time that we were glad that we had the AllTrails map downloaded because it took a little bit of searching to find the trail to Dream Lake.

This section of the hike was probably the most challenging, with a couple of different spots where we had to wait for people to get up a steep part of the trail or stop to take pictures. The challenge was rewarding, with the many different sights to take in, but this is when I started to think we should’ve found a way to make the 6am window work. Imagining being here with less than half the people around made me want to come back even more.

We eventually made it to Dream Lake, which is the largest of the 3 lakes that we would be visiting on our journey. The trail follows along the edge of the lake, and we took every opportunity we could to go down to the water and check it out.

We were greeted by a couple of rainbow trout at the first spot that we stopped at, and they were kind enough to come close enough for me to take some pictures and videos of them. Even though the fishing is catch and release, I tried to keep my two new friends secret from the fly fishermen walking by searching for a spot to drop their line.

As was so often the case on this hike, it was truly hard to make yourself keep moving to the next location because of everything there was to see and explore, but knowing that the 10 o’clock group would be hot on our heels was the motivation to reach Emerald Lake before they did.

The route from Dream Lake to Emerald Lake followed a similar pattern from the earlier portions of the hike, with a steady incline, some stair like features, but overall not that much of a challenge for those that are looking to reach the last lake on this leg. There were no steep drop-offs or sketchy river crossings, but the trail certainly wasn’t boring. I really enjoyed this part of the hike and being forced to explore a little to make sure that you’re on the trail still. I actually prefer this to the way-too-defined trails that I follow sometimes, I guess because it makes me feel like I’m in the wilderness just a little bit more.

When we arrived at Emerald Lake, there were several groups that had beat us there and had already staked out their spots. This was the only lake that there wasn’t really a route to walk around it and find your own private place to park. As the lake comes into view, there are some rocks on the left that I climbed up, thinking I was the only one with this idea, only to be greeted by more people on top of the rocks looking out over the lake. Giving up on the idea of a private viewing location, I found a spot on the rocks next to the others where I wouldn’t be obstructing anyone’s views, and we sat down to take pictures, relax, and take time to refuel with the few snacks that we had.

These are the kinds of views that I live for. As anyone that has read my posts knows, the natural mountain lakes are my favorite. The snow fields were still clearly visible on the mountainsides, though the intense sound of rushing water you could hear cascading down the cliffs to the lake below clearly indicated that there was a lot more snow melting than the eye could see. I wondered if this snow ever truly melted all the way, as it was already the middle of July and fresh snowfall comes to these elevations much earlier than others.

It was obvious from the deep emerald color how the lake came to be named as such. Despite all the other people enjoying the views, it was still peaceful, and I felt like I was all alone with just Carly and the lake for a moment as I took it all in.

With all the sight seeing and picture taking on our way to Emerald Lake, we had spent enough time on the trails and knew we needed to get back to the car. I took mental notes of the other lakes that I would come visit the next time I came. With so much to explore in the national park, I’m sure it will take many visits before I finally see all the things I want to check out, but I’m definitely okay with that!

We came back down a different route than we had gone up (the way that the sign pointing towards Emerald Lake would’ve taken you), and this is when I realized why everyone was going this way. It was a much easier trail, with most of it paved to Nymph Lake, but it certainly wasn’t as interesting or exciting as the way we took up from Bear Lake. If you’re up for a challenge, I’d recommend that “trail marker 30” route, but if you’re exploring with folks from out of town, take the trail marked as going toward Emerald Lake.

On our way out of the park, we passed a picnic ground, and honestly, I don’t think either of us were quite ready to leave yet, so we stopped to check it out. The picnic tables were right along Glacier Creek and it afforded some fun opportunities to climb around on the rocks and check out the flowing water from up close.

This was yet another amazing adventure in the great Colorado wilderness, and I’m already starting to think that my Top 5 hikes near Denver needs an update! I’m also already looking forward to where my adventure next weekend will take me.

One Reply to “Expedition to Emerald Lake”